Our craft shop is now closed, but our blog is still open.
Entertainment, Home 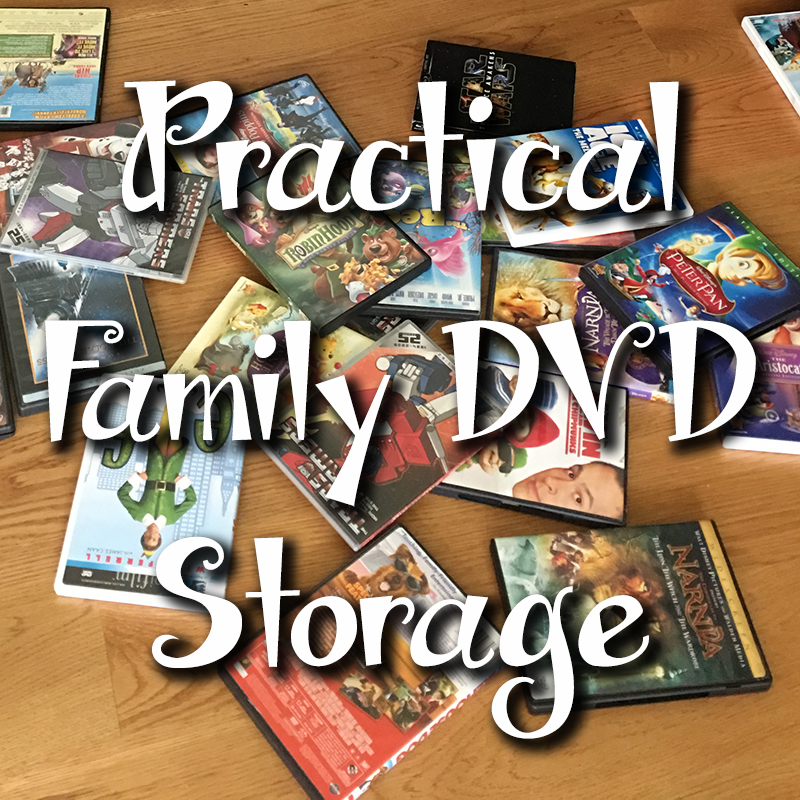 Lets face it: DVD cases (or even BluRay) take up TOO MUCH ROOM!! DVD storage has been a problem for a while. We haven’t jumped on the streaming bandwagon just yet (no plans to, but who knows) because of our spotty internet. So we still have a huge collection of movies. 10+ years ago I combined all the “baby” DVDs (i.e. Baby Einstein, Thomas the Tank Engine, etc.) into an old CD storage case. These were mostly the ones the little kids watched over and over and over and over and over… anyway. So we were getting them out of the boxes 939 times a day. Then when any of the babies started crawling and exploring, the DVD cases were among the first things they wanted to pull down, chew on, throw, etc. So into the new case they went, and it worked so well!

Fast forward about 10 years and that old case was not only full, but the cover had come off and things were getting messy. When we moved last year I stuck all the “big people” movies (aka anything rated above PG) on the bottom two shelves of the living room bookshelf, the old kid DVD case went on top and the kids’ BluRays went in between for easy access.

Now that JX is crawling all over the place and found the stash of boxes, that is his favorite place to go play. I wanted the space on the bookshelf for other things, like books or blankets. I decided it was time to do something about the old storage case and the massive amount of DVD boxes. I grabbed this giant case from Amazon Basics that holds 400 discs. When it arrived I pulled out all the DVDs from the old case and put those in the front, easy access for the kids. Then I dragged out all the other movies and organized them by “appropriateness” – basically the G movies are in the front, the few R movies we have are in the back, and everything else is in the middle. I made a holiday section too so those are easy to find when that time of year rolls around. It felt VERY freeing to throw the empty boxes in the floor, never to be worried over again! Later the boys gathered them into two giant trash bags to be recycled.

JX was trying to “help” a little. 400 sounds like a TON of movies, and I thought “This should be plenty of room for what we have and eventually I will put the BluRays into it too.” HAHAHA! Nope. I even had Booger count what was on the shelf before I bought it and this thing is still almost full. There are about 5 empty pages at the back. I forgot to count our box sets and special feature discs! Tho only downside we’ve found is the case is HEAVY – 15lbs or more. It sits on the shelf where the movie cases use to sit, but it will probably end up on the floor more than here so the kids can access their DVDs without it crushing them. The little kids do need help getting it out and opening it (which is kind of a plus, actually). Do you have any creative or unusual storage ideas for your movies?