Our craft shop is now closed, but our blog is still open.
Quilting 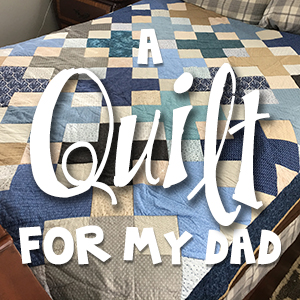 My dad, bless his heart, is always cold. In his defense we do it keep it pretty chilly in the house during the winter, around 67 or so. He lives with us, by the way. We built him his own small “suite” at the back of the house (so he doesn’t have to hear quite so much of the loudness that is our life) with his own door so he can come and go as he pleases. Being at the back of the house means its colder in his room than anywhere else in the house. He also seems to have lost his nice comforter during the move earlier this year.

I’ve been thinking on making him a quilt for a while now and decided to make him one for Christmas. He’s one of those “very hard to shop for because he has everything” people so I hoped a quilt would be perfect.

After some thought I decided to go with blue and tan fabrics with very little print.  Most of the squares are “Atlas” by Windham Fabrics. The rest of the prints are random fabrics I picked out at Joann. This is the pattern I chose because (1) it is simple and (2) it is not too frilly.  So many beautiful quilts just won’t work for a man. This pattern is just Here is the top all assembled with a dark blue border. I used the same dark blue paisley print as the border for the back. This was the first queen size quilt I attempted to quilt on my regular size sewing machine. I did simple stitch-in-the-ditch around each X shape by stitching zigzag diagonal between each row. It’s hard to describe. For the border I quilted it in a stipple pattern (random curves and turns that never touch) using free motion quilting. The final touch to this quilt was a hand embroidered quilt label. Since the quilting was done in dark blue thread I didn’t want the embroidery to stand out too much so it too is in dark blue. It reads “Made for my dad, Christmas 2017, by Sara”. I’ll be honest, this is one of the skills I’ve taught myself that I take pride in. I imagine my Nana, who did nearly all her sewing by hand, would be proud I can do something like this, especially given I’m horrible at hand sewing. And here’s the finished product on Dad’s bed. I think he likes it 🙂 Share / Save / Follow
Previous SchoolhouseTeachers.com - Resources for Homeschool Next Starting My 2018 Bullet Journal
Deal of the Day: